A Cruisin' to a Bruisin'

at 2:17 PM
The Cruisin'
Wow, what a week. Make that three weeks actually. We were so excited to leave on our Eastern Caribbean cruise and we did all the preparation to get ready and pack. Everything was uneventful getting there and we were amazed at how large our suite was with 150 ft.² of our own balcony space, our own butler, breakfast, lunch or drinks in the room and a special VIP only restaurant to attend. The cruise itself when it really

well. First we stopped in the DR and then went on to the US Virgin Islands/St. Thomas and then on to the British Virgin Islands/Tortola. (Only about 10 miles apart) of course on a cruise line, we went at around 5 kn all night cruising as far south as 17° latitude before heading back north to Tortola. The weather was beautiful and we really enjoyed the Virgin Islands. We did not get off the boat at Samana and that the reports were not that great. We spent Thursday at sea and on Friday morning the ocean was too choppy and the swells too large to allow for tendering service to Great Stirrup Cay. We slowly headed back for Miami at about 7 kn the entire way. We didn't have that far to go in the made for extremely smooth sailing. Overall, a great trip. Aside from a three-hour delay in Miami and the ground crew forgetting to load luggage on the plane, we finally got home at around 1 AM Saturday night.

The Bruisin'
as they say, "if you play, you pay!". Julie started to not feel well in the airport and it became much worse on Sunday and by Monday she was diagnosed with bronchitis. That then travel to me 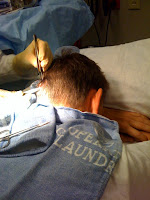 and I have been sick much of the entire week. We were able to get much done and did a lot of sleeping while the kids were in school. Luckily they had a good week at Dennis and Becky's house and none of them took ill. So, we're just starting to get better win yesterday morning I slipped on the ice and slammed the back of my head in to our concrete step. Reluctantly, four stitches later... I still have a headache and suspect it will last a number of days more. Stitches will be removed on March 31, 2010. I definitely thought it was a fitting title-cruising to a bruising!
Posted by Unknown No comments: