at 8:31 PM
http://eclipse.gsfc.nasa.gov/OH/transit12.html
The transit or passage of a planet across the face of the Sun is a relatively rare occurrence. As seen from Earth, only transits of Mercury and Venus are possible. On average, there are 13 transits of Mercury each century. In contrast, transits of Venus occur in pairs with more than a century separating each pair.
The last Venus transit was in 2004 so the second event of the pair will occur on Wednesday, June 6 (Tuesday, June 5 from the Western Hemisphere). The entire event will be widely visible from the western Pacific, eastern Asia and eastern Australia as shown in Figure 1. Most of North and Central America, and northern South America will witness the beginning of the transit (on June 5) but the Sun will set before the event ends. Similarly, observers in Europe, western and central Asia, eastern Africa and western Australia will see the end of the event since the transit will already be in progress at sunrise from those locations.
Tomorrow I will bring in my telescope and have it set up in the RA-11 parking lot for anyone that wants to witness the event.
Stop on by and experience the last Venus transit for 105 years (I think it’s safe to say the last one in our lifetime (2117)). 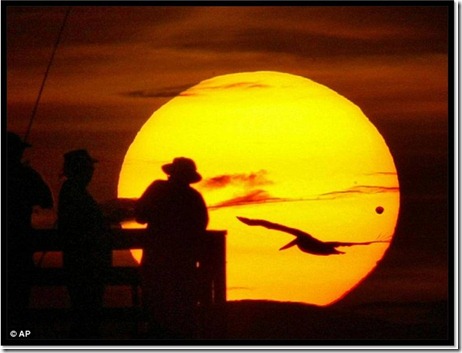 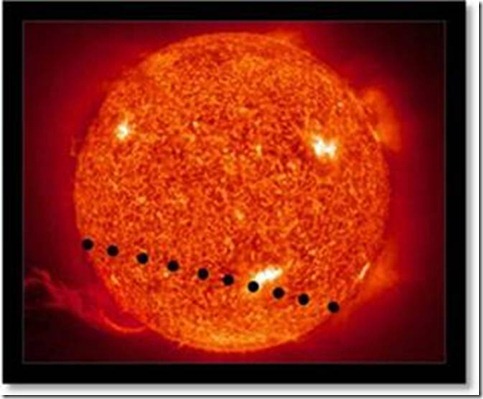 For Northern Hemisphere locations above latitude ~67° north, all of the transit is visible regardless of the longitude. Northern Canada and all of Alaska will also see the entire event. Residents of Iceland are in a unique wedge-shaped part of the path (Region X in Figure 1). They will see both the start and end of the transit but the Sun will set for a short period around greatest transit. A similarly shaped region exists south of Australia (Region Y in Figure 1), but here, the Sun rises after the transit begins and sets before the event ends.
The principal events occurring during a transit are conveniently characterized by contacts, analogous to the contacts of an annular solar eclipse. The transit begins with contact I, the instant the planet's disk is externally tangent to the Sun. Shortly after contact I, the planet can be seen as a small notch along the solar limb. The entire disk of the planet is first seen at contact II when the planet is internally tangent to the Sun. Over the course of several hours, the silhouetted planet slowly traverses the solar disk. At contact III, the planet reaches the opposite limb and once again is internally tangent to the Sun. Finally, the transit ends at contact IV when the planet's limb is externally tangent to the Sun. Contacts I and II define the phase called ingress while contacts III and IV are known as egress. Position angles for Venus at each contact are measured counterclockwise from the north point on the Sun's disk.

Table 1 gives the geocentric times of major events during the transit. Greatest transit is the instant when Venus passes closest to the Sun's center (i.e. - minimum separation).
I added the Mountain Time Zone to Table 1. First Contact begins at 4:09:38 p.m. and because the sun sets at 8:24 p.m. (a bit earlier because of the mountains) the total transit is not visible.
During the 2012 transit, Venus's minimum separation from the Sun is 554 arc-seconds (During the 2004 transit, the minimum separation was 627 arc-seconds). The position angle is defined as the direction of Venus with respect to the center of the Sun's disk, measured counterclockwise from the celestial north point on the Sun. Figure 2 shows the path of Venus across the Sun's disk and the scale gives the Universal Time of Venus's position at any point during the transit. The celestial coordinates of the Sun and Venus are provided at greatest transit as well as the times of the major contacts.
Note that these times are for an observer at Earth's center. The actual contact times for any given observer may differ by up to ±7 minutes. This is due to effects of parallax since Venus's 58 arc-second diameter disk may be shifted up to 30 arc-seconds from its geocentric coordinates depending on the observer's exact position on Earth. Table 2 and Table 3 list predicted contact times and corresponding altitudes of the Sun for locations throughout Canada and the United States, respectively. Table 4 provides similar predictions for a number of cities around the world. 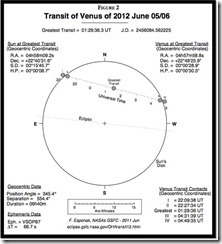