ALS has so many facets and so many varied symptoms. Lately, one in particular, fasciculations or twitches of muscles throughout the entire body has been causing me much discomfort and distress lately. If you’ve ever had a twitch under your eye or a finger twitching, in ALS, it is a little different. It feels as though the muscle is rippling underneath the skin much like a snake belly ripples as it propels itself along. Mostly, they are small and distracting during the day because I am able to still move about so much and not notice them (as much). Occasionally, there can be a sudden twitch like a rogue wave in the ocean that causes a limb, finger or arm to actually move a bit. I hate it when this happens while I am trying to control the computer mouse… :-)

As I said, this isn’t so bad during the day, but just try to sleep with this going on all over your body. The doctors say that there are no drugs to subdue this symptom, but it can be masked by taking Valum or other relaxants prior to bedtime. I tried baclofen for a long time to combat this, but it appears that I don’t have the symptoms that are best suited for baclofen (i.e. muscle cramps and/or spasms: more on muscle cramps in a moment). Clonezepam has been prescribed for anxiety, but it has a side effect of subduing fasciculations. I take 1 mg of this approximately 2 hours prior to bed. It works faster than this to make me tired, but when I hit the bed, I want to be out immediately and not lay their feeling these movements.

Take a look of the video to get a better idea of what I’m talking about. The lighting had to be just so… to cast shadows in the proper way to make them visible to the camera. These occur in my upper arms, chest, calves, neck, tongue, etc. sometimes I believe that I experienced fasciculations far more than the normal ALS patient. Also, I truly believe twitches are the beginning signs that those muscles are beginning to atrophy. My legs have been strong for almost 4 1/2 years, but are now starting to show signs of significant atrophy. My forearms and hands don’t really experienced twitches anymore and they are almost totally useless. All in all, I realize that I am a slow progression example and thank God every day for the many additional years that I have been granted. It angers me and upsets me deeply when I hear stories of people who are affected by ALS in the more traditional two-year timeframe. This shitty disease needs a cure, and fast!

* This was dictated with Dragon Naturally Speaking ver. 10 Pro speech recognition software. Please excuse any "Speakos" I may have made. :-)

Getting to See ALS Research First-Hand

at 9:17 PM
While on vacation and in Michigan, Julie and I were invited to see the ALS research being done at the Van Andel Institute. We met the project director and the post-doctorate researcher in charge of drug study. A friend of the family also works at the Institute and was aware of this research was nice enough to set up the meeting for us.

After arriving, I was amazed at the beautiful architecture and the size of the Institute including the cavernous entry and lobby area. We had lunch at the

Institute cafeteria which was more like fine dining. The researchers were so interested to be talking to an actual ALS patient. They
spend so much time in books and other research materials, that it is not often that they have the opportunity to visit, sit down and discuss what it is that they are working on all
day and are so passionate about understanding and curing. They listened carefully as I described in great detail the onset symptoms, how it progressed, what issues I cope with today and we even delved into a little bit of my history growing up, activities/hobbies and family.

In the lab, we were able to look at the SOD1 mice that they use to test various drug therapies. The researchers showed us how to tell the difference between “in stage" (mice with ALS symptoms) and unaffected younger mice. We were able to see slides that were prepared for microscopic study and also see mice spinal cords that are used for research. Not that I am a big laboratory animal fanatic, I say test more, but it was nice to learn that the mice are euthanized as soon as it becomes difficult for them to obtain food or water. An interesting fact that I had not thought about. Similar to what some humans are fighting for..?. but that's another story and not one that I support.
Anyway, I want to thank the staff for an incredible opportunity and Julie and I were so proud to see people hard at work trying to cure this awful disease. I figure it best that I don't use names as there may be some crazy mice lovers out there... :-)
Posted by Unknown No comments:

Mount Rushmore and our cross-country Trip 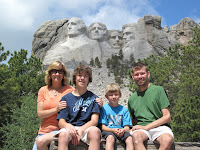 We left on July 6 and traveled for 5 1/2 hours arriving in Keystone, South Dakota. It was raining, but we thought to visit Mount Rushmore anyway. Very surreal with the grey clouds and the grey faces blending together. The next morning, just as we thought, beautiful weather and crisp blue skies. Definitely a worthwhile trip. we also went through bear country, which I highly recommend. About a 2 Hour drive through an open wilderness Park with guaranteed sightings of many different wild animals. 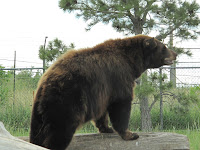 We continued on through Minnesota, staying the night and continuing along I 90 in to Wisconsin and then entered Illinois from the north. 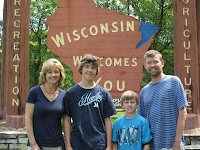 We were able to stay west of Chicago and miss the five o'clock traffic. Rather than spending the night and taking an extra day, we decided to press on and arrived in Rockford Michigan, north of Grand Rapids at almost midnight. We were all glad that we continued on and finished up the drive. We stayed four days at Scott and Mary's Lake House where we did a lot of tubing, airplane flights and barbecue parties. 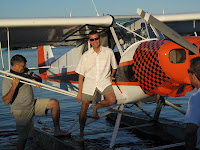 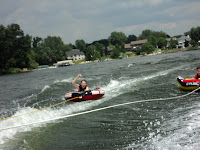 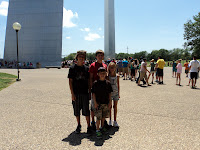 After our visit, we headed off to Texas for Premier Designs National Rally and the boys stayed behind to return to Colorado along with Todd, Carli and Mary driving. They were able to take a more central Route than our northern Route and got to see the St. Louis Arch. The crew of four kids along with Mary also pressed on to make the drive and arrived back home in Colorado late that night.
So much more to share, but I will have to save all that and all the other pictures for another day.
Posted by Unknown No comments: