We are so excited to now be able to share that our TV show "Live For The Moment" LFTM, produced by Jeff Probst and Mark Burnett will be shown at prime time on CBS, 8 PM EST/PST and 7 PM Mountain/Central on January 28, 2010! in the typical Survivor timeslot.

So much more to come as we begin promoting the show and contacting various agencies.

A response to a new ALS patient...

at 12:06 AM
A lady on our ALS forum who feels she is progressing quickly and also has two children ages 17 and 12... There are so many questions from people who are newly diagnosed with ALS. I try my best to help newly diagnosed patients. Unfortunately, I know what it's like to be there...

Hi ?????,
I never did take the Rilutek and never thought it would have much impact on progression speed. At best many patients say that it only helps in the last stages of ALS. (I.e. last two months) my progression is abnormally slow and I thank God for that fact every day. It has been for the half years and my hands, arms and shoulders have atrophied significantly. Although I can still use them to do daily tasks, is not without fatigue and difficulty. My wife cuts my food and we also purchased a special toilet seat boduet. My legs are still working well and we even went skiing a few weeks ago with my arms dangling and no polls.
When I was diagnosed, my kids were age 8 and four. After, we kept it to ourselves but felt strongly about beginning to give our eight-year-old a little bit more information. Eventually, through our outreach and involvement with fundraisers, they both began to understand the entirety of the situation. Now, at age 13 and nine, they both understand what ALS is and what will most likely be their father's final outcome. We have looked into counseling for our 13-year-old and he is, in fact, involved with seven other kids in a special discussion group both for moral support as well as school improvement ideas. Going through puberty isn't helping either. We don't notice any changes with our nine-year-old behavior except that he is very willing to help me around the house. He does act much more concerned about his father Dan many of the other kids on the block. This will be a great benefit to him later in life-the compassion and patience. Our older one doesn't seem to be affected by our situation, but my wife and I know better than that. We know that at his age there must be many thoughts and fears because of future changes and the unknown. It's hard to find a counselor that you feel comfortable with and that you can feel is actually making a difference. We find that just talking to them in a very open way while in the midst of playing games or some other activity, is the best way to find out how they are feeling and what they are thinking.

My Website Involvements: How does one take charge of their own situation?

at 11:17 PM
We have found ways to become involved with the ALS community. Both from a fund-raising standpoint and from an awareness standpoint. I have a very strong dedication to the ALS TDI organization due to the work they are performing and the fact that they are solely focused on a cure for ALS. I don't know of any other organization that is this large and working this hard solely on one disease. This isn't to say that patient services and other assistance isn't important as well, it is just the fact that I really want to see a cure for ALS within my lifetime of course. :-) See our personal family site below and also our contributions and involvement with Patients Like Me. PLM is a global database where patients with many different disorders can come together in one community and share their medical regimen, feelings, questions and other concerned with people in similar situations. One of the exciting elements for me, is that PLM allows you to create database queries or other filtering techniques which can turn up some fairly interesting results. 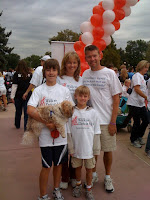 Every year we have attended ALSA "walk to defeat ALS" fundraising event either in Fort Collins or in Denver city Park. Here is a picture of our family as well as our dog just before we got started. We had a chance to meet all of our friends and I was able to do all three laps. Last year I had ran two of the three laps, but this year I elected to walk. (Although I felt that I could have ran probably 1/2 to 1 lap.) Either way, God has blessed me and my family. We feel very privileged to take part in this fund raising event. Please consider joining us in 2010. Or, you can find a ALSA sponsored event in your area. we went by the name, Team Roger. Www.ALSACO.org
Posted by Unknown No comments:

My FVC results have just come back

at 2:47 PM
Wow! I spent the better part of two months panicking about whether or not my FVC would stay above 90%. There are completely healthy people who have FVC's in the 80s, but I just felt that if I went into this zone, it would just be another reminder and another event that was sort of "in my face", that ALS was taking its toll. having my hands, arms and shoulders loose virtually all muscle tone is bad enough. I am not blind, of course I know there will be further progression, but every little bit of positive news helps!

All that worrying for nothing. The Dr. was very pleased with this result and we were able to bypass any discussions related to bypap or other therapies related to reading difficulties.

at 4:42 PM
I thought that I would start a blog in order to document some of my thoughts and feelings. I'll be using my speech software in order to get these words down and try and keep my thoughts cohesive, I will just keep talking even though the software may make mistakes in understanding me.
After diagnosis almost 5 years ago, the first two years were spent not really knowing how to respond to this new knowledge. Part of me was in a panic and wanted to take family photos and video as well as go on trips as often as possible. You begin to become tired and worn down after A while of keeping up a hectic travel pace. I wanted to help others who were newly diagnosed. I was able to do this successfully to some degree, a few people that I met with have now progressed further than myself and I have yet again entered a new timeframe of my diagnosis.
It now seems strange that my aggression has gone so slowly. What am I to do with this time that I strongly feel God has given me. (is this what they mean by "survivor's guilt"?) Every minute is precious, yet I don't find myself treating each minute preciously lately. True, some of my capabilities have been diminished, so I can't be running around and as active as I once was. But, there are plenty of things that I can do over the phone or through the computer that I still don't seem to get a handle on. part of me feels like I am battling and emotional component to my daily life as well. Well, of course, some people would say-you have ALS... but, beyond that, it just doesn't seem like my attitude is the same as it used to be. I could have started this blog by retracing my feelings as far back as 2005, and I still may do that at some point in a different section. These are the feelings I have now and they reflect the position that I am in with my diagnosis and in my life at this point.
Posted by Unknown No comments: