at 2:07 PM
Things May Have To Move to the Feet…
BLOG UPDATE:  And we’re moving to the feet now to test devices early…. 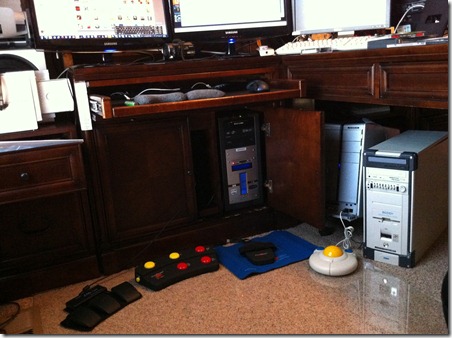 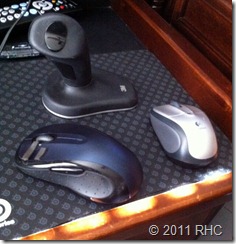 to not click so easily (a little slip of highly calibrated :-) paper under the button) and the left click button modified with some rubber pad bumps to stop my forefinger from sliding backward.

For many years I used the 3M pistol grip mouse as seen in this picture.
I have recently talked to the local ALSA to discuss options for controlling the computer with my feet. My hands will still work for short periods of time or where I need the most accuracy, but if hundreds of clicks are necessary, my finger and hand will get very tired. I still do a lot of video editing, producing and encoding along with gaming and computer drawing/art. I figure if I can use two hands to move the mouse around, then I could use a foot pedal to control left, right and custom buttons with my feet.

The following is an assortment of devices that we are ordering and that I have either already tried or will be testing for review. "I'm the high-tech, handicapped beta tester" :-)

You can search on the web and very quickly find all sorts of solutions. A few that stood out to me are the Savant Elite foot pedals which can be used for Mac

or Windows and also can have buttons with custom programmable features such as single click = double-click or a button that opens your inbox with one click, etc. Eventually, even controlling the cursor movements will have to move to the feet. http://www.kinesis-ergo.com/foot.htm
Later of course, all these functions will move to eye or head tracking devices as progression continues. The following links are for the the foot pedals and large trackball that I will be testing.

http://www.fentek-ind.com/Bigtrack.htm
Some organizations have done extensive work to offer free solutions for handicap people. One such piece of software can be found at http://www.cameramouse.org/. It uses your own web cam to tack your face!  A free download. I'm actually so amazed that it works almost as well as the $1200 Head Mouse Extreme by origin instruments http://orin.com/access/headmouse/index.htm.

I used this device for a number of months and found it to be very difficult to control and with poor software which was also very outdated (antient, in the high-tech world). It seems to be optimized for very basic computer use and when increasing its sensitivity

my 24 inch monitors, it then became too difficult to hold your head still in order to hover over a letter or icon. Even after playing with sensitivity and acceleration settings. Virtually impossible to use for any work that requires accuracy. Yes, I am somewhat of a computer nerd and hobbyist with nine systems. 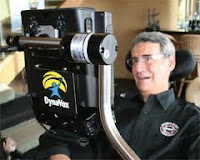 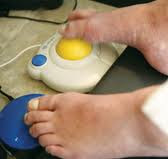 initially starting
If anyone would like to write me about computer operation or input devices, I would be more than happy to help any patients or caregivers with as much assistance as I can. I'm happy to donate all of my time and knowledge regarding getting-by day-to-day with ALS issues freely at any time.
I also offer remote, full computer support services. Write me!
Posted by Unknown 1 comment:

at 12:14 PM
Opportunistic Déjà Vu
http://hirise.lpl.arizona.edu/
http://marsrover.nasa.gov/gallery/press/opportunity/20110120a.html
NASA’s Mars Rover, Opportunity, had another Photo Op perched on the edge of another crater. While Opportunity sat at the edge of Santa Maria Crater on Mars the HiRISE camera aboard the Mars Reconnaissance Orbiter (MRO) satellite orbited overhead and snapped the image below. This is the second time that HiRISE has been able to record a picture of Opportunity resting at the edge of a Mars crater. The last opportunity was October 3, 2006 when HiRISE imaged Victoria Crater with Opportunity perched at the crater’s edge moments before the rover carefully rolled down into the crater to explore the crater’s morphology. 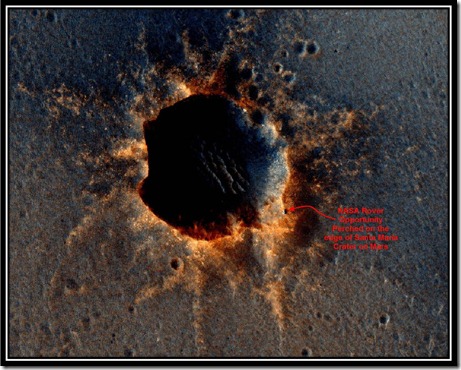 Below is a expanded view of the Santa Maria Crater without annotations. Opportunity’s tracks are clearly visible running off the left of the image. 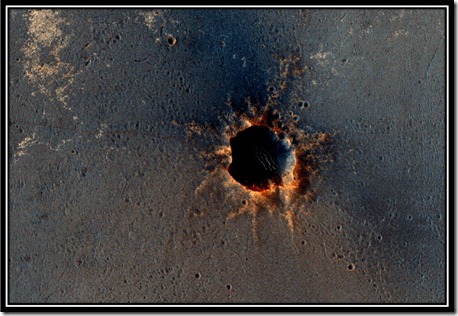 Below is an image of Santa Maria Crater taken by Opportunity from its perch shown above. The rock outcropping to the left below can be seen above at the bottom of the crater.

Opportunity took the image above by rotating and tipping up and down the Ball built mast residing atop the rover and taking smaller high resolution photos that were combined to form the mosaic above. The notches at the bottom give you an idea of an individual picture size. 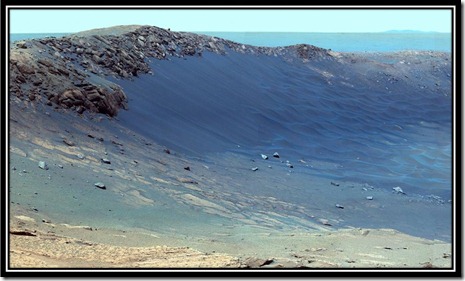 The image above is a closer look at the rock outcropping displaying the impressive resolution of the camera. The diameter of the crater is about the length of a football field. On the horizon and off in the distance to the right is the crater Endurance which Opportunity visited earlier. Opportunity’s image of the Santa Maria Crater was sent back to Earth to celebrate the seventh anniversary of its landing on the planet. Not bad for a rover whose design life was thought to be 90 days!
Below are photos of Opportunity’s last Photo Op at the edge of Victoria Crater… 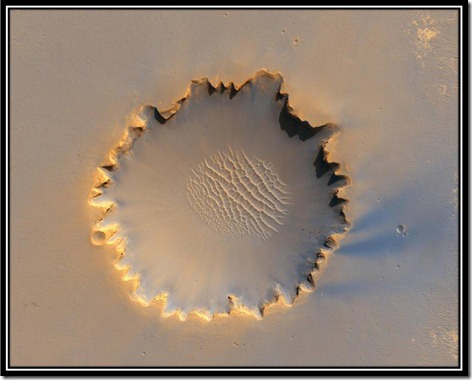 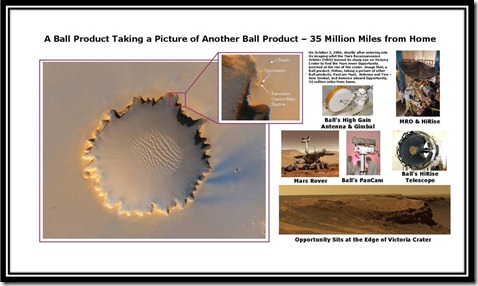 I'm very proud of my Company


Posted by Unknown No comments: