slow the progression of Lou Gehrig's disease, a neurological disorder that has left the British cosmologist almost completely paralyzed.

After the visit, the 71-year-old Hawking urged doctors, nurses and staff at Cedars-Sinai Medical Center to support the research.

Hawking recalled how he became depressed when he was diagnosed with the disease 50 years ago and initially didn't see a point in finishing his doctorate. But his attitude changed when his condition didn't progress quickly and he was able to concentrate on his studies.

"Every new day became a bonus," he told a packed room. 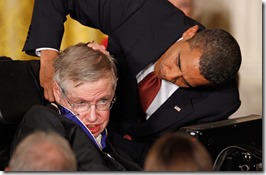 There's no cure and no way to reverse the disease's progression. Few people with ALS live longer than a decade.

Diagnosed at age 21 while a student at Cambridge University, 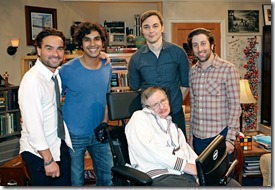 Hawking has survived longer than most. He receives around-the-clock care, can only communicate by twitching his cheek, and relies on a computer mounted to his wheelchair to convey his thoughts in a distinctive robotic monotone.

A Cedars-Sinai patient who was Hawking's former student spurred doctors to invite the physicist to glimpse their stem cell work.

"We decided it was a great opportunity for him to see the labs and for us to speak to one of the preeminent scientists in the world," said Dr. Robert Baloh, who heads the hospital's ALS program.

During the tour, Hawking viewed microscopic stem cells through a projector screen and asked questions about the research, Baloh said.

Cedar-Sinai scientists have focused on engineering stem cells to make a protein in hopes of preventing nerve cells from dying. The experiment so far has been done in rats. Baloh said he hopes to get governmental approval to test it in humans, which would be needed before any therapy can be approved.

Renowned for his work on black holes and the origins of the universe, Hawking is famous for bringing esoteric physics concepts to the masses through his best-selling books including "A Brief History of Time," which sold more than 10 million copies worldwide. Hawking titled his speech to Cedars-Sinai employees "A Brief History of Mine."